Remember I told you that Marlene Glickman and I are working on some collaborative pieces...

and I hinted that there was no stress involved.


Well, after going into the play room to make Marlene's quilt beautiful, I really messed it up. The more I quilted, the more ruffly it became. 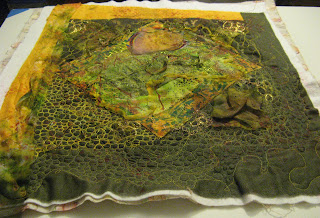 It got to where I had to iron it so I sprayed the back liberally with water and ironed with a hot, hot iron hoping and praying nothing would melt. I did a little spot first to test and it was fine so I ironed the *&$&^@ out of it. 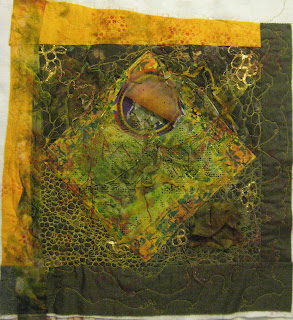 
I thought I was getting happy, but after a few minutes it pretty much started wobbling again. So I quilted some more.

I gave up after using a whole spool of thread in the bottom right corner and disgustedly went downstairs to brood. And eat.


I asked Jerry what he thought about stretching it over stretcher bars and he got the concept but had never done anything like that and I've done very little so we didn't feel confident about that idea.

Never one to give up easily, I tried again, by couching circles of yarn into the bottom corner thinking that would "go" with the circle Marlene added top center. 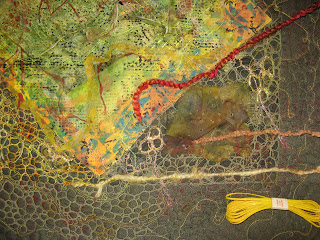 Oh what a disaster... 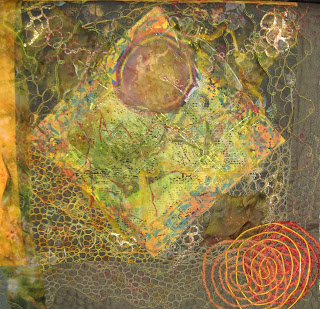 
So, I got out some green paint and subdued them. 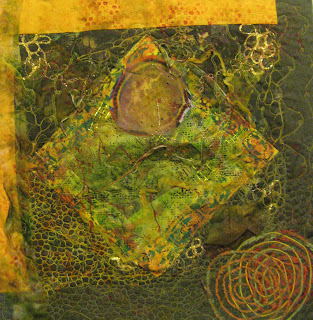 The artist's block I'd talked about earlier was nothing compared to what I was feeling now. I got depressed and mean. I hate to admit it, but I can be really mean.

So, I just tried to stay by myself and ended up at the computer talking to my dear free spirit friend, Trish.


Well, she suggested that I try something sculptural and I loved the idea. At this point, that was about all that I thought would work.


Thanks to Trish…
I started thinking outside the box…
(it had a lot of tape and glue and string and wrapping paper on it and was hard to get out of)
and I felt much better and opened my digital Quilting Arts emagazine...


As I was reading it, I came across an article about selling art at fairs and craft shows and there...in beautiful color...were some purses hanging at this lady's booth.


I could make a bohemiannie! bag out of this quilt!


For those of you that know me, I've made, carried, sold and taught (at 2009 International Quilt Festival in Houston no less) this bag for the last 2-3 years.


It was like the weight of the world was lifted off my shoulders and I felt wonderful!!!


When I realized that my funky mood, depression, overeating, stress and a lot of my meanness of the last week was due to my worries about this quilt, I couldn't believe it.


I put it ALL on myself. Marlene has never made me feel anything less than wonderful about myself.

So why? Why did I allow this to impact me in such a negative way?


I'll have to think about the answer to that one, other than the obvious - which is - I want her to love what I bring to her as much as I love what she puts into my pieces.


And, I really wanted it done in time to take to Florida when we go next week.


Yes...I do procrastinate...but I did do the first quilting screw-up a couple months ago. I mean, I tried to get it done early. I thought about taking those stitches out but just knew there had to be a way to finish it with out being that dramatic.


ANYway, I was so happy when I woke up this morning and have been all day.


I got into my playroom and chose fabrics 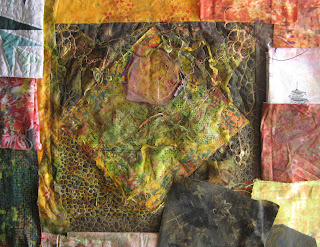 to finish the top edge of the bag and found a really cool belt that works as a handle. 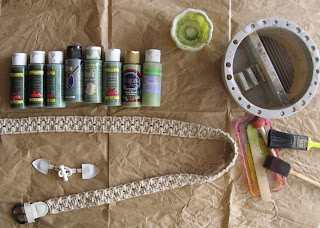 It needed painting so I spent some time trying to mix the right colors and of course had to paint lots of other things while I had all that mess out... 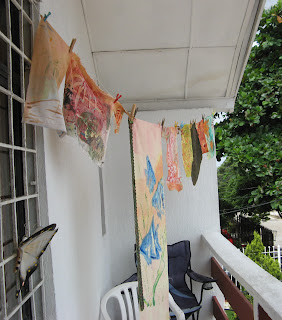 including the pockets for the bag. :) 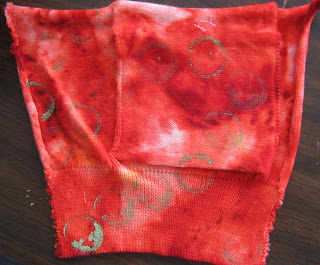 The one above is from what used to be a white sweater that I Kool Aide dyed a few months ago with my free spirit friends - and then added the green circles today using the bottom of the paint container.


The next pocket used to be a plain off-white muslin drawstring pouch which I batiked while at a workshop - and just happened to be sitting next to Marlene at the time. I added the green circles and red paint to one side of it. 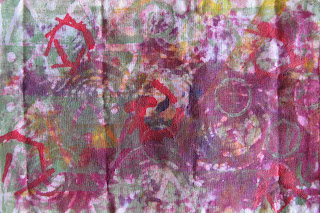 So...I was going full speed ahead and by around 3pm today, I finished Marlene's bag! 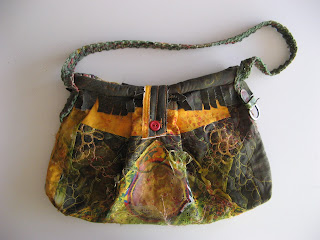 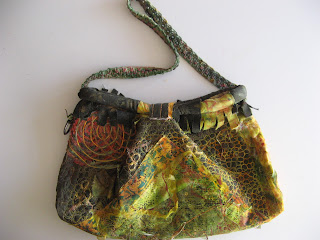 I was at a Tampa Bay Ray's game last year and every time they did something really cool, which was every few minutes; I'd let out this totally redneck holler that goes a little like this...


And this kid in front of me kept looking back and giving me a look like a was a raving maniac. At one point, I hollered so loud and long that he just cracked up laughing and when he bent over and held his stomach, he actually rolled off of his seat and down a few stairs before the railing caught him.


And, I hear the Rays are in the top four and it's killing me that I can't even watch the games on tv.

Posted by bohemiannie! art at 6:17 PM