I'm totally amazed by the number of page views my blog is getting.

Isn't that a cool word? I tried finding the origin and came up with very little, but the Dictionary.com website had the most info and they say it comes from the words flabb and aghast which when put together became flabagast. And then, in time (this originated in 1765-75) turned into flabbergast. The meaning is clear -


"to overcome with surprise and bewilderment; astound"
So now you know.


Anyway, thanks for having a look-see. I am truly overcome with surprise and bewilderment. I am astounded.
I began blogging mainly because I want to keep track of my art projects.


You can't imagine how many times I've picked up a piece of fabric and wondered how in the world I got it to look like that. I always felt a little idiotic answering "I don't know" when asked the same question by friends.


Here's one for instance: 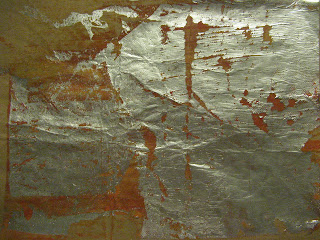 Actually, in loading that picture, I had to think about how I did it and it isn't fabric at all...it's paper. I ironed a piece of painted wonder under or steam-a-seam to a brown paper bag and then foiled it. I love the effect and will do it again soon I'm sure.


So anyway, I began keeping a journal with a few crude drawings and copious notes but every picture tells a story don't it?


I decided that to really be able to reproduce something, I needed pictures. Hence, the reason for my Adobe Photoshop Elements program holding 24,630 pictures as we speak.
And, the reason for beginning this blog again a few weeks ago.


I don't ever print pictures and couldn't stand the thought of having to do that for my journal so this is perfect! It just takes too long to scroll through all those pix.

So, I write it all down here, post pictures where appropriate and Voila! As long as I have internet; and I'll never take that for granted again; I have my notes on any given project. And since they're here...I can delete some of those pictures from my hard drive.
As it turns out, I like to write down my thoughts and some of the hum drum details of my life along with the art notes. Of course my life has Sophia - and it's exciting and funny times too!
Speaking of funny...Jerry, my hubby, is still able to get a good laugh out of me most every day.


This morning we were drinking coffee on the lanai and I mentioned that the washing machine was rockin and rollin. (It was in it's spin cycle - which translates to squeeze in Spanish). (That, in itself, is funny). The squeeze cycle.


Anyway, we were washing whites (which of course includes Mighty Tighty Whities) when I told Jerry that it was rockin and rollin. He replied, "It's trying to get away from my underwear".

He definitely marches to the tune of a different drummer.


It's one of the reasons why we've kept each other for 32 years this month! 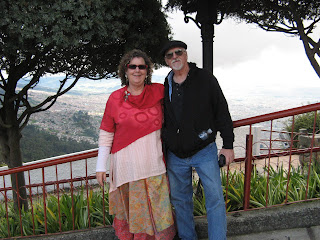 That's us in Bogota, visiting Monserrate. What a gloriously beautiful place.
BTW - thanks to the anonymous person who emailed to correct my spelling of Cali. I'd googled it because it didn't look right and lots of sites came up - most spelled wrong like me I guess. I didn't really take the time to read them though because they were in Spanish - just assumed.
And you know what assume means.
It makes an ass out of u and me.
I got told that years ago when I assumed something.
Back to Jerry.
There's something I've been meaning to show you. 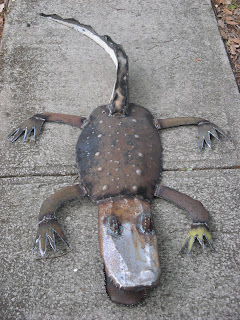 Jerry makes alligators out of scrap metal. He's the real artist in the family.


My friend Jeri happened to be visiting a few weeks after he made the first one (above) and she got to take it home with her. It went to a good home. :)

This is the second one he made... 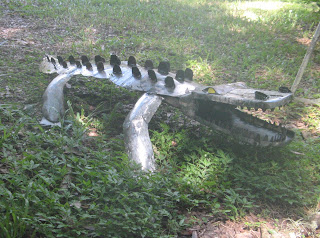 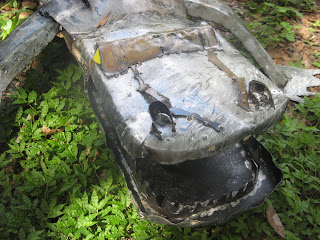 He just happened to make that one exactly a year ago while I was playing with my girls at the Art Quilters Unlimited retreat at Kenilworth.

I took those two pictures on Bear's birthday last year. It's coming up again on Thursday! Happy Almost Birthday Bear!

Alligator #2 was bought by another friend and now lives in St. Petersburg, FL with a really cool couple that we met shortly before moving here to Colombia.

Here's the next alligator he made... 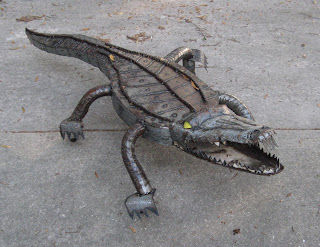 This one's name is Elvis and belongs to me! Jerry dreamed about it one night and it woke him up several times. He said it's name was Elvis in the dream so that's that.

And the last one was made for our very awesome neighbor, Steve. 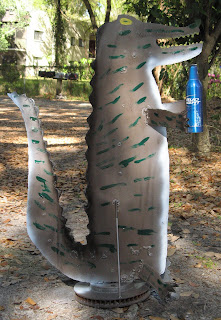 Anywho, the first one is about 5 feet long and the other two are closer to 6 feet. He made a Mouse Rod - as in - almost a Rat Rod and had some scrap metal left over from the '89 S-10 Pick Up that he used for  the chassis and running gear.


Next time I come across them, I'll show the pix of his Mouse Rod and mailbox topper alligators. For now...it's past my bed time.
Posted by bohemiannie! art at 12:39 AM