Wow! I just started typing my blog address and hit 'go' before highlighting the correct page and here's what came up in Wikipedia...It kinda, sorta describes me to a T...

Bohemianism is the practice of an unconventional lifestyle, often in the company of like-minded people, involving musical, artistic or literary pursuits, with few permanent ties. Bohemians can be wanderers, adventurers, or vagabonds.
The term bohemian, of French origin, was first used in the English language in the nineteenth century[1] to describe the non-traditional lifestyles of marginalised and impoverished artists, writers, journalists, musicians, and actors in major European cities. Bohemians were associated with unorthodox or anti-establishment political or social viewpoints, which were often expressed through free love, frugality, and/or voluntary poverty.
The term emerged in France in the early 19th century when artists and creators began to concentrate in the lower-rent, lower class gypsy neighborhoods. The term bohémien was a common term for the Romani people of France, who had reached Western Europe via Bohemia.[2]
It's really funny to me that people told me all my life that I was bohemian and I never really knew what it meant. I did relate it to the starving, free spirited, art lifestyle but didn't necessarily see myself in that light. But in reading the above exerpt, it really does kinda fit me. What do you think?!?


Early in life, I had gotten to where I called myself a gypsy because I'm always the one to instigate moving and we've moved a lot. I'm sure if it'd been up to Jerry, we'd still be in Yorktown, Virginia - where we met, married and birthed our two chilluns - which wouldn't be bad, but then I would have missed all those wonderful people, places and adventures along the way.

And BTW, Jerry's last name, Wade, which has been mine now for 32 years as of this September 9th, means "Wanderer". Betcha didn't know that.


So, it was meant to be. I'm living my destiny if not my dreams. And...bohemian life IS good.


Now if only I could eat candy, cookies and chips without gaining weight, compromising my health or rotting my teeth. (What does that have to do with Bohemia)?!?


So...our last venture out into the city of Barranquilla was to stop at TelMex, our local phone/internet/fios provider, and Complain. I speak just enough Spanish now, that I was able to get my message across loud and clear. I did keep a smile on my face because I was afraid they would just cut me off and I'd never have service of any kind from here on out. That's the way many of the Colombians, not all, do business here. If you push or fuss too much - that's it. You're out of the system. Too bad, so sad, no internet connection for you.

We did enlist the help of a very kind, muy amable, gentleman, John Imitrola, who has been working our neighborhood to sell telephone landline service for TelMex. We had met and talked with him a couple times previously when he rang the doorbell with his cold calling. He made the mistake of waving to me when I was on the balcony last Saturday and I hauled him up into the house to let him know I'd buy telephone service when they got the internet working. (It had gone from intermittant to nada). He called the company for me and raised hell. (He's allowed since he's an employee). They promised him they'd be here Sunday afternoon, which didn't happen, but he did call again for us on Monday, just mere hours before we arrived at la oficina to Complain.


Lo and behold, a TelMex technician came on Tuesday morning and fixed it! Fixed! He had to tighten every spot that needed tightening in the house and on the pole outside (the same pole that caused our electric to mess up last month) but we feel confident that he did it right and I'm a happy camper. 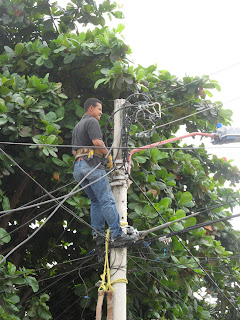 This is our electrician, Christian, on said pole (taken last month when we only had half of the electric working in the house).

And BTW...I asked -in Spanish- for a discount at the TelMex office since we hadn't received service and got almost the whole amount owed knocked off  our bill (for TV and internet). Cool, huh?!? And Pedro got off the hook.


I love not having to bug him (Pedro) for every little thing. He doesn't mind and will do anything we ask but I know and you know it's a pain. He's a good son-in-law. He's in Bogota this week. Lucky him.


I've been working on my mini quilts again. I'd gotten to a point where I was just pissy enough not to go into the playroom for 3 days (because I was pouting about the internet problem) and finally got over it and started playing again. I added paint to the borders of these mini's and used up the left over paint on the fabrics hanging in the picture below it. 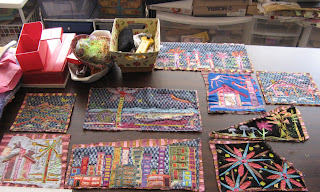 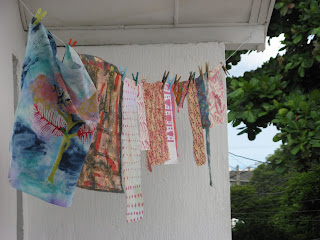 I was inspired by my wascly wittle wabbit... 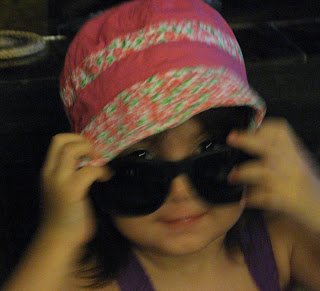 Yep. That's Sophia. Even though it's blurry, I was lucky to get this shot because it only lasted a fraction of a second and those glasses were off again.


Anyway, she just bounds up the stairs when she comes over and gets right into making art. She usually heads for the glue shelf and tries to pilfer a tube along the way to her own special spot - but I always catch her and sometimes she wins and other times I do.

She is the only other person I know that loves glue. If you look at my post "It's A Brand New Day-A-A-Hay" below you'll see the project that started this addiction.

I probably have 60-70 (I stopped counting just now at 30) bottles/tubes of gel, glaze, paste, glue, additives, etc that I need to use up before it dries up and she is happily helping me achieve that goal.


And yes, I did sniff glue ONCE, about a million years ago with great trepidation and fear and have never wanted to do it again. What an instant, horrible headache. Now you know what's wrong with me.


Back to the first of the week. We walked to the end of the block after talking and smiling to the TelMex people last Monday and there, on the corner, was this little art shop. It's called DisenArte and the owner is a graphics artist with really colorful, wonderful everything in her shop.


They have classes on Monday, Wednesday and Friday each week and I can't wait to go the the class they're giving on Friday which is called "Resina".

I didn't see an example of the actual finished product but I've wanted to play with resin for years and here's my chance. I'll take pix and let you know how it goes. I bought a picture there of a hand giving the peace sign which I'll post later too.


Speaking of pictures...did I ever show you the view from the end of my street? 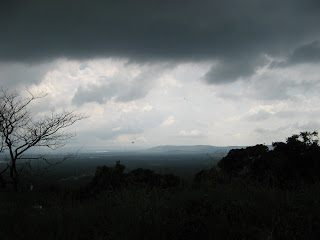 Well actually, this is around the corner to the end of the street. A two or three minute bicycle ride from the house, but we have close to the same view just a 30 second walk away. It's the Western edge of the city and it's always, always beautiful.


On the other hand, there are parts of the city that aren't as beautiful in the same sense but fascinating nonetheless.

The above picture was taken while we were walking from the Centro Colombo Americano Bibliotecha which is just close enough to down downtown to be a little scary. There's a mall at the end of the street that we were headed to. We don't like malls as a rule, but it has a decent food court where we can get typical Colombian food and sit in the AC for awhile.

OK - gotta get busy beading those mini quilts pictured above. (I have fallen in love again with hand work). It's that Beryl Taylor again. :)
Posted by bohemiannie! art at 6:35 PM