HAPPY BIRTHDAY SANDY! I LOVE YOU!

I've worked on my book all weekend but don't feel like I've gotten very far with it. What I did do was organize, sort, & straighten every thing I touched in the play room.

It's almost as enjoyable as making art!

For instance, when I was looking for cabochons, I got out my supply of little bitty zip lock baggies (I had those sorted into size from another day) and had a blast just looking at all of them (not the baggies, the cabochons) - putting the diamond shapes, the clear glass, the octagonal, the white, the rhinestone, etc into little piles and bagging them up. Next time I want one, I'll know what I have and it'll be a zip to find them.

The problem with my obsessive compulsive disorder - if that's what you want to call it - is that it's time consuming and takes me away from the thing I want to do most...which is make art.

But...I don't think I'm obsessive about it although my family might tell you I am. They'd be exaggerating excessively.


It might be a little compulsive - that need desire I have to organize, but I prefer to believe I just like things to be...

Growing up, the old adage 'A place for everything and everything in it's place', had to be followed with six kids in the house.


And who says it's a disorder. I think it's an order. I like things to be ordered. Orderly is good. It keeps my mind at peace.


Which brings me back to my book. 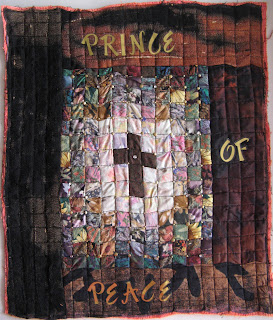 I started by trying to mix colors (to paint what used to be white batting sticking out) to match the color which is on the flip side: 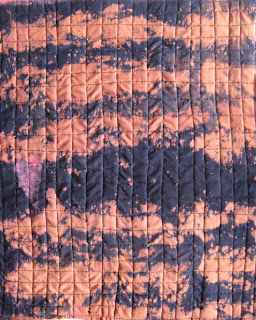 I was a little off but I still like it. That weird pinkish heart - which you can barely tell is a heart - was done before I added more orange paint to the mix. I'll cover it up with something later.


Anywho, I've been writing down quotes and phrases that come to mind with the word peace in them. When I made the colorwash cross, The Prince of Peace was definitely on my mind so I spent a couple three hours looking for letters.


You wouldn't believe the collection of letters I have. Stencils, and I mean lots of stencils, stamp sets with different fonts and sizes, and stickers that I won't be able to use if I give Sophia a sheet of them every time I see her. Thankfully they were already organized or I'd still be in there.


I played around with stamps and stencils on practice fabric (which will eventually be used in a project) but nothing showed up quite the way I wanted it to - so I chose gold stickers.


Then, when I was looking for those cabochons mentioned above, I came across these little iron on thingys and put one in each corner. (Look at the picture - I can't explain it any better than that). 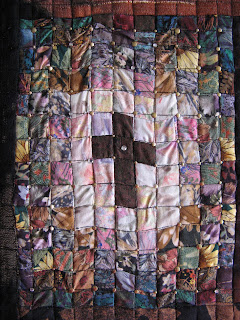 
I also worked on lettering for my hamsa page... 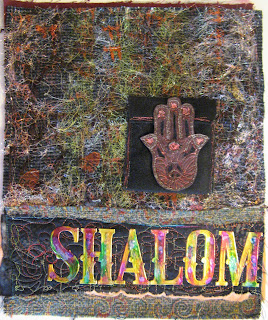 Which turned out way too bright. I have some antique-ing ink that might help. Of course, Adirondack Inks are what got it looking like that in the first place. They started out as gold (paper) letters which I glued on. If I didn't think it'd leave a mess, I'd pull them off and start again.


The top of the background is a piece of a wool jacket onto which I free motion stitched that crinkly stuff you can get at Christmas time.

The bottom, under the letters, is a piece of black satin sewn onto an upholstery sample that I sandwiched with batting to use when I needed to see if my machine was ready to go. You know...a practice piece.


The Hamsa was inspired when I was on a trip to Dade City with my dear friends Trish and Davida and saw a beautiful hamsa pendant. I really thought the artist was Michal David but when I just checked her website, there were hamsas - but nothing like what I saw.


I made the hamsa out of felt as a little purse and will of course include something inside but it's a secret.

I don't even know the secret yet. What's with that?!?


This page will probably be the cover: 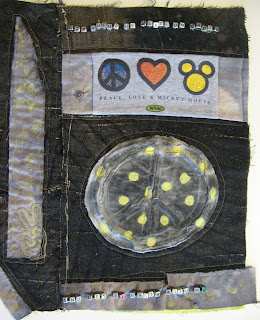 I have dozens of bead letters but couldn't finish the quote without getting into three different sets.


I spent almost a week - about a year ago - obsessively sorting my beads. I LOVE it that I can now find what I want within minutes.


You have to understand that about 75% of my art supplies come from yard sales and when I'd come home with my stash, I'd toss it all into a big bowl to sort later. Usually when the bowl was overflowing.

I sure miss yard sales.

Yard sales are something I KNOW I'm compulsive about!


The gray panel at the top of that page is from a t-shirt I bought at Disney when Hillary worked there. Beneath that is a peace sign that used to be part of a sweatshirt I'd decorated for Hillary and sent to her when she lived in Germany. I bought the hand-giving-the-peace-sign stencil while I was in Kansas last week - shopping with Jerry, Bear and Winge  - and after stamping, stitched around it. And surrounding those are pieces of discharged fabric. 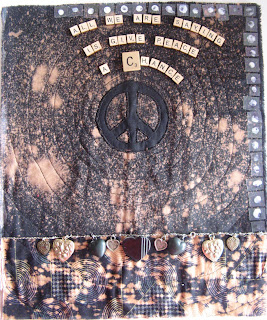 I used a broken necklace chain to divide the two pieces of fabric. I sewed it on my with trusty Juki and broke it a bit more but still like the way it looks. It took me OVER AN HOUR to attach the hearts to jump rings to the chain. I am so not into working with wire.


And I so admire those that do it so well. Like my friend Trish. And Mary Hettmansperger. Trish doesn't have a website but check out Mary's if you like really funky, awesome metal jewelry.

Anywho, I had these little Scrabble-like pieces that I used for my sentence. They're smaller than the real thing as you can see in the picture. I was short one C (the big one in the picture) and broke into three of my Scrabble games to confiscate re-purpose the letters.

Hey...that's what I bought them for!


And - I'm sure I don't have over a dollar in all three games.

I miss those yard sales.


I think I mentioned in a prior blog post that the peace sign was done by laying a piece of jewelry (a peace sign no less) onto black fabric and spritzing it with bleach.


If you try this, the best way to stop the bleach from eating up your fabric is to soak it in a little vinegar water. I just put a couple gulks of vinegar into a little tub of water and toss in the fabric for a few minutes.


I may be wrong about this because my memory isn't what it used to be (remember I have CRS), and I'm ready to get off the computer so won't research right now, but black dye baths are made by throwing the odds and ends colors together. This makes it very interesting when you discharge because you end up getting different colors - usually red and orange but often gray, or even blue. It's always a wonderful surprise.


I almost forgot. The little squares with the white circles (glue that will dry clear) in them along the edge of the page are the plastic pieces that the letters were stuck to before I cut them apart. I almost threw them away but figured if I used them HERE and NOW I could save them. It's sooo hard to throw things away.


Is that obsessive compulsive?


OCD is the fourth-most-common mental disorder, and is diagnosed nearly as often as asthma and diabetes mellitus