I didn't know why there was so much buzz recently about the Zodiac changing -
because I don't follow my horoscope -
and if it was on the news in the States, I missed it.
You have to remember, I'm living in Barranquilla, Colombia and at any rate...I don't have much time for TV.
Unless Modern Family is on. And then I'm so sleepy by 10pm I miss that half the time.
But...when I saw so much hype on Face Book about the Zodiac calendar changing because of the earth's rotation... 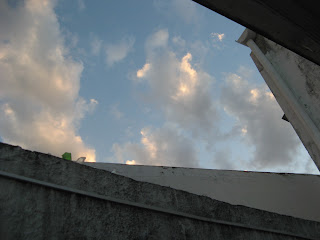 I checked to see what was going on. It seems that many of us now have new Zodiac Signs.
Imagine that!
Here's what comes up at the top of my google search:
Zodiac Sign Change
For most of 56 years I thought I was a Taurus but it turns out...I'm now Aires.
Here are descriptions of the two that I pulled offline...(is that a word?)
Aires...
the first sign of the zodiac, is the emergence of the sprouting seed. It is the pint of all beginnings. Aries is the out-rushing force --sound and fury-- primitive self-expression -- the joy of being. Its forcefulness is much like the ram which lowers its head and blindly charges. The Aries influence gives an adventurous, pioneering spirit, courage and a blunt and direct manner. The forcefulness of Aries is so strong that restrictions cannot be endured. Aries people are forever moving on to new projects, seldom completing the old ones. An Aries person inhibited by daily routine and a sedentary life is likely to eventually explode. The "me first" attitude of Aries can go to the extremes of selfishness, crudeness, egotistical attitudes and foolhardiness if it is not tempered by sensitivity to other and strong guiding ideals.

Taurus combines the practicality of earth with the concentrated nature of a fixed sign. Taurus people, being ruled by Venus, are lovers of beauty and are themselves often quite charming. They are very affectionate, but their strong need for security sometimes lets their affectionate nature become possessive. Taurus people are strongly rooted in their opinions. They can be stubborn and don't like to be contradicted. However, Taurus people can change. Just don't expect that to happen more than once! Tauruses are particularly patient and often reliable and practical if their laziness and inertia don't get the better of them. Tauruses have incredible endurance and they often have an excellent business sense. They carve luxury, art and good food.

I was kind of blown away with the descriptions because I think Aires fits me lots better than Taurus does. What do you think?
Speaking of Aires - there is an airline by that name that flies into Barranquilla with pretty decent rates and I'd LOVE some company down here. I don't know if you could stand the weather though.
It's 79 right now with a strong balmy breeze and is expected to go to 89 tomorrow. It's ALWAYS summer here.
Our lanai - 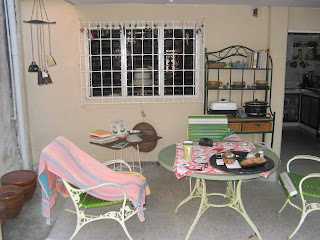 is as finished as it's going to get for the time being and is just waiting for company to sit on it. 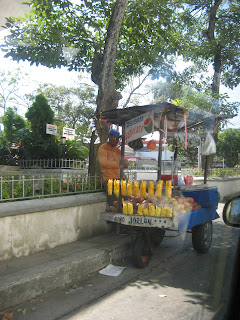 The fruit vendors all over town will keep you refreshed...
And we can go out for fast food at a gazillion different restaurants in our barrio alone. 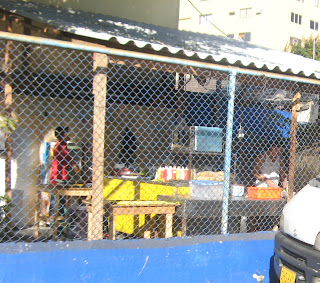 Our barrio, by the way, is Los Nogales. Named after a black walnut tree I think. I'll have to dig in to that and let you know for sure later.
We can visit a neighborhood tienda 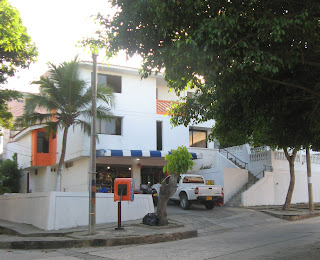 and drink a beer while watching Junior win a soccer game. Might as well - because business practically stops when they're playing.
Seriously.
We'd have to go afield to find the real thing...but Jerry has been making some pretty cool alligators out of welding rods and scrap metal... 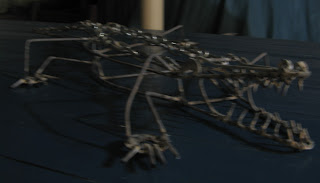 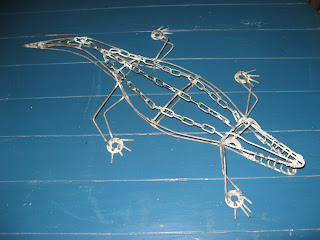 Is he awesome or what?!?
We can visit Salgar Castle 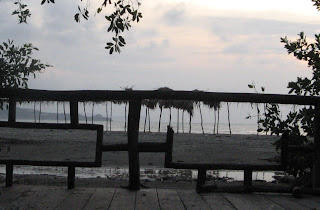 which is way over there on that promontory on the left side of this picture. I took this shot at my friend's house, who lives on the beach between here and Puerto Colombia.
Speaking of friends. I am now meeting with a small group of ladies who gather together every week to make quilts or do handwork. 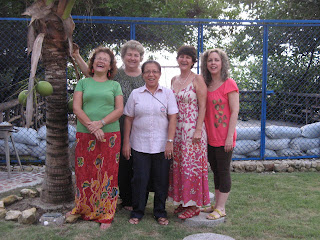 For the last several years, whenever I snap a shot of anyone, anywhere, I always say...
OK Everybody...Say Shit.
And inevitably get some giggles.
I can't help it. My dad did that all my life and it was the only time that I could say a cuss word without the threat of getting my mouth washed out with soap.
These girls speak Spanish when we meet. The lady in the back speaks pretty perfect English and has been my translator. The day that we were at the house above, when everyone burst out laughing, I, of course called on my 'interpreter' to find out what was being said.
She explained to me about this bus that runs from Barranquilla to Puerto Colombia - which didn't used to be - but now is - a tour bus. The bus is extremely long and I honestly didn't get the joke...but when it goes by the Barranquilleros say nojoda. Only...because the bus is long...they stretch out the word till it sounds like nojoooooooooooooooda. (no-hoe-da). They then explained that nojoda means holy shit and had me repeat it a few times.
Seriously.
We were having so much fun.
:)
So...when it came time to leave and I was already outside snapping pictures, I took one of them.
And said...
OK Everybody
...say nojoooooooooooooda.
They thought that was hilarious! 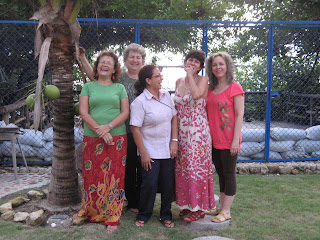 I am very fortunate, grateful and happy to be a part of this elegant, refined group of women with their big, loving hearts.
We met at my house last week and I had a gallon zip lock baggie full of small scraps. I asked and they agreed to participate in a challenge where we divided the scraps into six piles and we each have to make something...anything...out of them. The only rule we came up with was that only 1/4 of the finished product could be of something they added to the scraps.
I decided to make a necklace out of my scraps and I'm about half way through with it now. I'm lovin it and will show you pictures another day.
For now...I'll leave off. Got to go work on that necklace!
Create your life,
annie!
Posted by bohemiannie! art at 9:05 PM