But...I'll fast forward a bit and mainly concentrate on
projects in progress (or completed). I mentioned
earlier that we had to wait for our belongings for 6
weeks in an empty house so I bought some paint and
painted my version of sunflowers on the wall enclosing
our lanai. 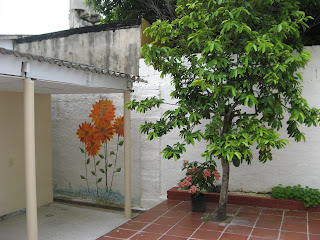 That wall is beautiful but
it's there to keep out the
bad guys. Same with the
metal gates out front that
you see in the picture below. Unfortunately,
there is an abundance of thievery in Barranquilla but I'm fully expecting them to stay away from the gringos (that's us). The flowers look quite different now because with the rainy season, some of the black tar that you see at the top of the wall has crept down into them. I love the look - nature only greatly improved what I did. Anyway, this project isn't finished yet but I don't want to work on it until December or January when things dry up a bit down here. It rains almost every day but the clouds move fast and furious so we see lots of sun on a daily basis too - usually. (I thought the storms in Florida were something but these put them to shame. Maybe it's because we're up on a hill. Remind me to tell you about the streets turning into
arroyos). I plan to add wildflowers and a few bugs to the wall around the sunflowers, along with lizards and
whatever else strikes my fancy. The whitewashed wall
goes all the way around the lanai, so I have high hopes for making it into a bit of wonderland. That is if I can tear myself away from the play room. The plant in the pot with the pink flowers is one that we bought at a nursery downtown and brought home in a taxi. It totally filled the front seat. You can see it out front in the pix below.

Jerry has taken over the care and maintenance of the plants and it's incredible how quickly seeds grow. He put a mango seed into a pot and Voila! we now have a little tree. Same with cantelope seeds that I scraped off the first one we bought and ate here. He also planted watermelon and tomato seeds that have a lot of greenery, but no fruit yet. They've been flowering like crazy so I don't get it. 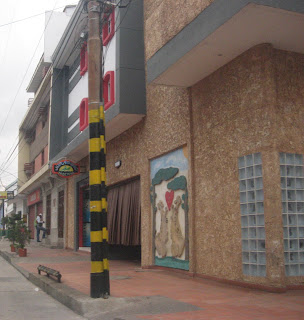 I've been told many times (by strangers and friends)
that I should put my camera away but I dont' listen
and don't believe it will be taken from me. As my
friend Brenda said, I might as well take my chances
on it getting stolen because it doesn't do any good
stuck away somewhere. The point in having a camera
is to take pictures and at this time I have 24,610 of
them in Photoshop. Here are a few taken when Pedro,
Jerry and I went downtown to look at a Land Rover.
(Yes...we ended up buying it and that's another
story).

These pictures are of art on the sides or front of buildings in the old, poorer part of town: 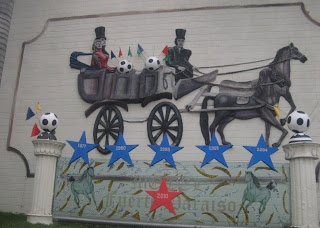 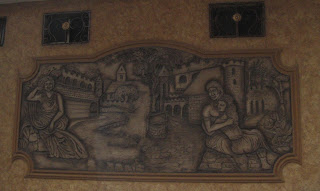 They're taken from the window of a moving taxi so
they're not the best pictures - especially since you
can't see the buildings - but I'll get back down there
one day and take more. I've been warned that it isn't
an area I want to be in after the sun starts to set and I will heed that advice. 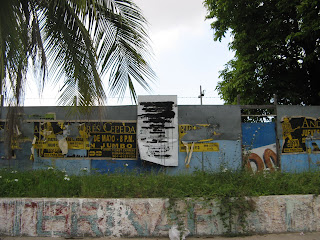 This picture (right) is typical of the walls around buildings in the city which in their own way, are beautiful. At least I think they are.
I have some awesome pictures of grafitti, taken in
Bogota, which I'll show you another day. The grafitti
in Barranquilla isn't quite as refined (I guess that's the
word I'm looking for)but still very expressive and way
cool.
Colombia is known for a few sculptors (Julio Abril,
Ramiro Areiza, Rodrigo Arenas and Fernando Botero
are a few of them) and I don't know who did this one
but there are several sculptures and statues scattered
throughout Barranquilla. This one is around the corner
from where I get my manicures and pedicures: 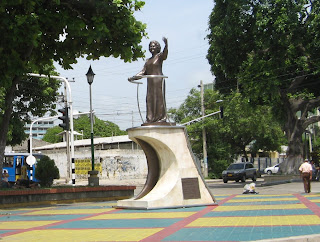 I pamper myself about once a month because the
cost for BOTH is only $9.50. I always thought it was
frivolous to have my nails done but this lady, Cheve,
knows how to give a pedicure and it's health thing for
me as much as a pretty thing. Those that I had in the
States didn't do a thing for me.
OK - just one more thought before I get off my...
computer. We hung the American Flag on the balcony
for the 4th of July and I felt so happy and proud to
have it hanging there. 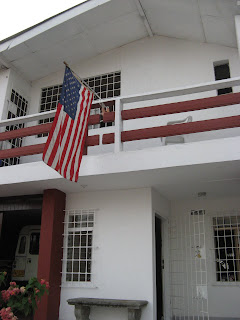 A few of the neighbors gave me a 'thumbs up' and the
fellow next door mentioned it the next day and while I
don't understand most of what he says, I know he recognized it as Cuatro de Julio. Anyway, I was in my playroom and a vendor came by selling avacados. I wish you could hear them call out what sounds like
a-wha-cot-tay!
On the 4th, when he passed the house, he yelled out
a-wha-cot-tay gring-o!
To this day, I'm sorry Ididn't buy avacodos from him on the spot. I did and still do get a laugh when I think about or re-tell the story.
God Bless America! and Gringos!
Posted by bohemiannie! art at 8:40 PM