Might As Well Enjoy The Ride - Take The Long Way Home

Today Jerry and I explored a bit. We walked a couple blocks from the house to the nearest bus stop and did something we've been wanting to do for awhile...we got on the bus!
We had no idea of where it was going so we were off on an adventure. :)  The driver looked at us like we were bonkers and asked me a question in Spanish, which I didn't understand, but told him, (in English of course) "Yes...this is the bus we want". He shrugged his shoulders and took off.  And boy you better be ready when they take off because they're in a great big hurry to get to the next stop and if you're not holding on to something, you're gonna go flying.
After taking the front seat we realized quickly that we were headed down the hill to the south. Pedro, and others, have warned us that there are many places to the south that we don't want to be so I got a little nervous when the bus kept taking turns onto these narrow roads that didn't look like they went anywhere. Anywhere safe that is. The neighborhoods are obviously very poor and shabby and rather depressing. I hate to think that so many people right here in Barranquilla live with so little. Unfortunately these are also the neighborhoods with the most crime. We finally came to a crossroad that we recognized from when we went to the airport but we crossed it and kept going into areas that I really didn't want to be.
I had to paste a smile on my face so the Colombians getting on and off the bus wouldn't know that I was scared. I never get scared. So...with half of the trip preoccupied with my  head trying to get my thoughts into a 'happy' place, I missed a lot of the scenery. I was worried about taking the camera out of my bag and then remembered those big words I wrote about on that very subject...was that yesterday?!? and bravely started taking pictures.

Here's one that's a little wonky but hey...those buses really do fly...so by the time I realized I wanted to take a picture we were way past. I didn't want to be stupid and flaunt my camera so I held it rather low and couldn't see that it was crooked. It made me feel slightly better to see that the area was so well patroled. :) God bless la policia! 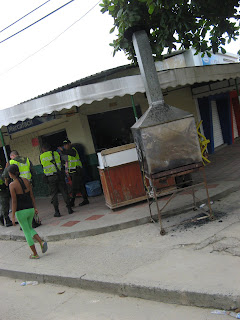 That must be a  cooker for the restaurant sitting out there on the street. Yes...that's a restaurant.
All of a sudden we were in a market area and passed by several tiendas (stores) and realized we were the only two on the bus so I got braver with holding my camera up and took this picture:
It's really quite pretty, isn't it? 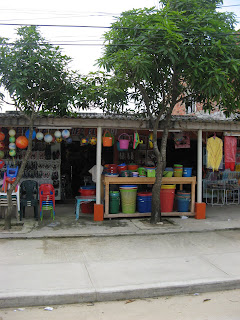 We quickly found out that the reason we were the only two on the bus was because we were at the end of the line. I had asked Pedro if he knew if we could get on a bus and ride until it came back to the point of origin and he wasn't sure but thought we would have to transfer. I totally did NOT want to get off the bus and try to find out where or when to catch the next one.

Again, our driver gave us a questioning look and I twirled my pointer finger in the air and thankfully he understood that to mean we wanted to stay on. He stopped, flipped his sign which said "Centro" (downtown) and we took off again. This picture was taken while the bus was backing up to retrace his route. 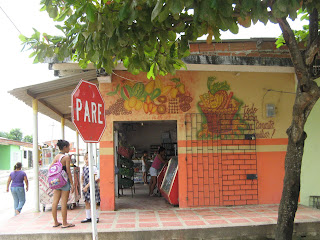 When I look at it I feel foolish for being afraid. I mean, don't those women and child look scary to you?!?


OK - so in this next picture, we're back at the crossroads I mentioned earlier and if we'd taken a left at this street, we'd be headed north up to our barrio (neighborhood). When you click on these pictures, they'll open up larger in a new window and you'll be able to see the tall buildings on the hill. Those are a couple miles west of where we live. If we'd taken a right, we'd be on the road to the airport which is at the southernmost end of Barranquilla. Yes, we do need to clean up our city. I'd love to see a campaign started like the good ole US of A did back in the 60s with
'Give A Hoot - Don't Polute'. 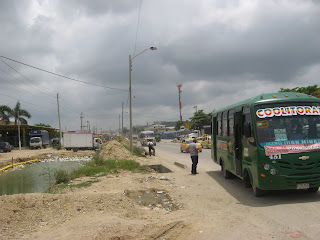 Soon we were back in familiar territory and kept asking each other, "Should we get off here and take another bus"? We didn't want to push our luck but both of us wanted to see where he went next so we stuck it out and actually ended up in an area that I'd hoped to explore.
We got off the bus in a section of downtown (around the corner from where I get my nails done) that's almost all commercial and happens to be fairly familiar. We waved goodbye to our bus driver  - he was all smiles and honk honk see ya later by this time - and jumped out the back door to do some sight seeing by foot. There's a part of me that knows he was looking out for us the whole way and that's the real heart of the Colombian people that I've seen, time and again.
Right away we ducked into a fabric store because part of my mission this month is to find WonderUnder - or anything like it. They sent us down the street and we looked at Modiste after Modiste. They sell buttons, beads, buckles, sequins, thread, some paint and many other sewing supplies, but no bondable web. I've put it on my list to buy when I'm in the states next month!!!