I Should Be in the Play Room But...

I just spent about 2 hours looking for, loading and describing pictures and somehow...lost it all.

I really should be in the playroom (the original title of the blog post was the only thing that saved) but I'm determined to get this done.

My intention is to journal about the art I've worked on in the last couple months and I wanted to show you this unfinished piece which Marlene Glickman and I collaborated on...and I've just this week, finished "my part" on  - or one of my parts anyway. 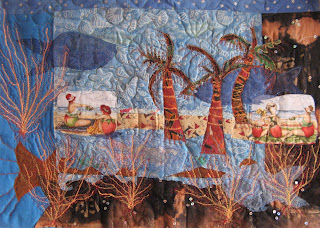 I don't have a name for it yet - probably because it's not finished but I'm lovin it!

When I send it back to Marlene...there's NO tellin what it will look like.  Then again, she may just do a little embellishment or bind it off. We shall see.


Shortly after meeting Marlene, she asked me if I'd like to work on a piece for a special exhibit - An Octopus's Garden.

At the time, I had just joined, and she was the President of the Surface Design Guild of Tampa Bay and our group was asked to submit pieces for an exhibit which was curated by Carolyn Kossar (also a member of SDG at the time) for Hillsborough Community College. Marlene jumped right on it.


The exhibit, An Octopus's Garden, was held for three days - outside -  in Ybor City, FL at the El Pasajae building Archways. 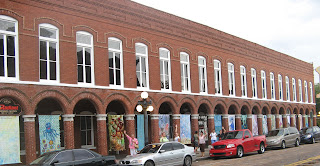 The following picture is a detail of our panel before it was finished: 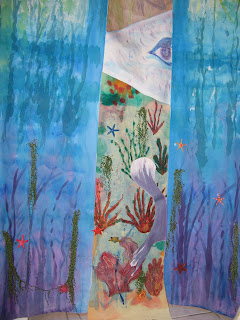 And here it is hanging in my bedroom (Jerry installed a special rod) so I could 'see' it as I worked on it. Don't worry - I eventually used that rod for LOTS of other things. 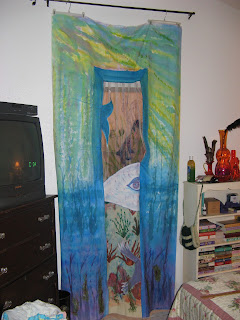 Finally...here it is hanging in Ybor... 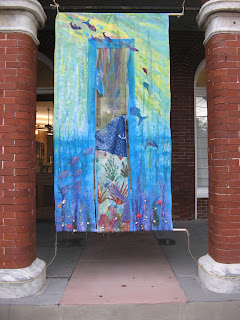 We had so much fun - and success on the piece that we decided to collaborate on another...and another...and it's an ongoing thing at this point in our lives.

Here's how it works:

Each of us begins a piece and then we hand it over to the other. We then do whatever  we want to do to that piece including, cutting, tearing, burning, sewing, embellishing, painting and whatever else comes to mind.


Then we pass it back.

And on and on it goes until the owner (the piece we started with is the piece we keep) deems it finished.


It is EXtremely challenging and fun - and rewarding.


Unfortunately, I haven't taken as many pictures of the process as  usual, but - I do have several to show you.

I can't find any pix of the beginning of this quilt (the one above), but I can tell you it was a piece I didn't like that I'd done as an exercise in a workshop.


After giving it to Marlene and her magic touch, it came back thusly: 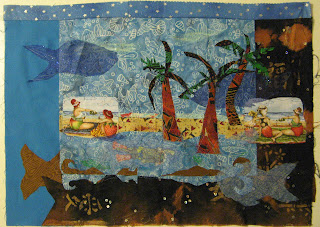 I love what she's done here! If you've never played around with expanded squares...that's one of the techniques she used and it's fun, fun, fun!


The following is one of Marlene's pieces in it's 3rd or 4th phase... 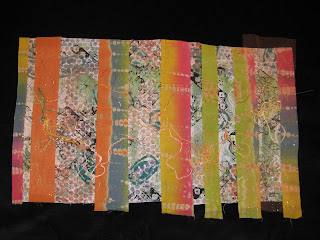 Which I will always regret doing this to... 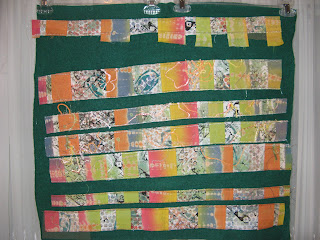 After working on it a bit more (no way I was passing it back in the above condition), it got better. 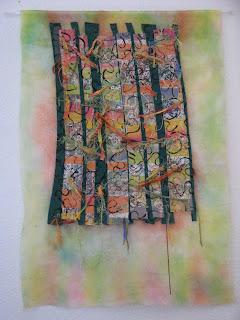 Marlene added the sheer hand dyed fabric behind it which softened it up quite a bit thank goodness.

Here's a piece of timtex that I painted, stitched and added bits of lace to... 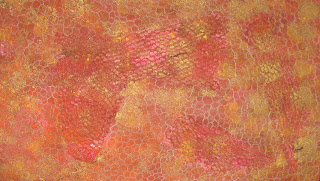 which Marlene promptly cut up and added her beautiful fabrics to create this...

(I felted the cheesecloth onto it and then later painted it). 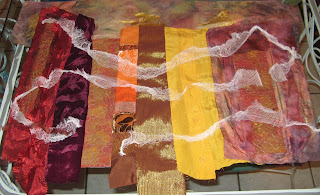 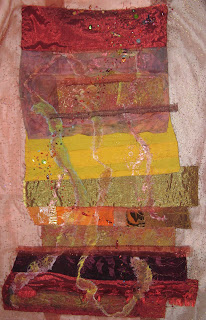 and I have it happily hanging on my office wall at this moment!


And here are some of the stages the bohemiannie! bag  went through...(which I blogged about previously in the Yeeee Hawww post) 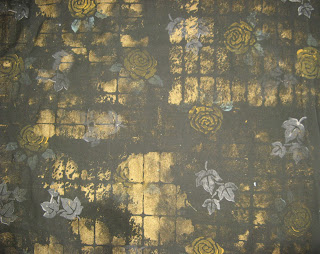 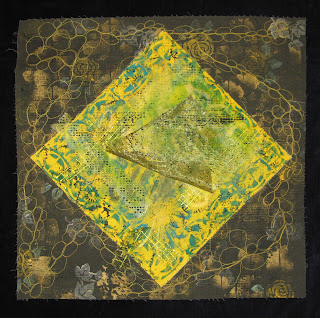 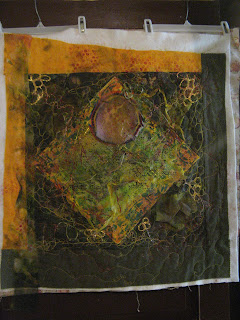 Before becoming one of the favorite bags I've made so far... 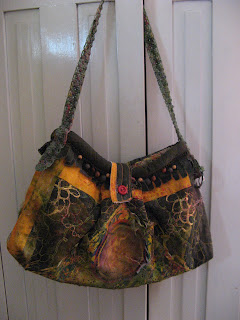 I now have a yummy Marlene-hand-dyed silk scarf that she passed to me when I was in Tampa in October. She included one of those loosley woven scarves and a sheer fabric which blends in beautifully with the other two pieces and I'm off to hang it on the design board - and get to work on it!


As Pablo Picasso said, "Inspiration exists, but it has to find us working".

So off I go to the play room.

Posted by bohemiannie! art at 3:03 PM